The Big Summer Get Out!

The Big Summer Get Out! is an active summer challenge promoted by Watchtree Nature Reserve and kindly sponsored by Dodd and Co, suitable for individuals and families alike!

Although Watchtree prides itself on being a fully accessible activity site, it is important that our visitors know that North Cumbria hosts a wealth of other fantastic and completely accessible routes that can be enjoyed by everyone. The aim of this challenge is to promote them – and get people outside!

What do I need to do?

Watchtree has compiled a list of accessible routes and walks in North Cumbria, each containing several landmarks. Register to enter via Eventbrite, and choose your mode of transport – be it walking, running, cycling, wheelchairs, rollerskating, skateboarding, taking a pram or scooter – whichever you prefer! Then Get Out! to as many of the routes as possible, collecting photos of yourselves with the set landmarks as you can!

When you have reached a landmark, take a photo of yourselves at that spot, then either email it to us here at Watchtree, or post it on your social media accounts, making sure you tag Watchtree in. Once you have achieved 8 landmarks, you can claim your medal. Some routes will have more than one landmark, so you may be able to collect a few in one day by going along just one route. Other routes are slightly longer and may take more time to collect the landmarks! You may be able to string more than one route together with another!

It costs £10 per person to enter, and once you have completed the challenge, you will receive a beautiful medal! 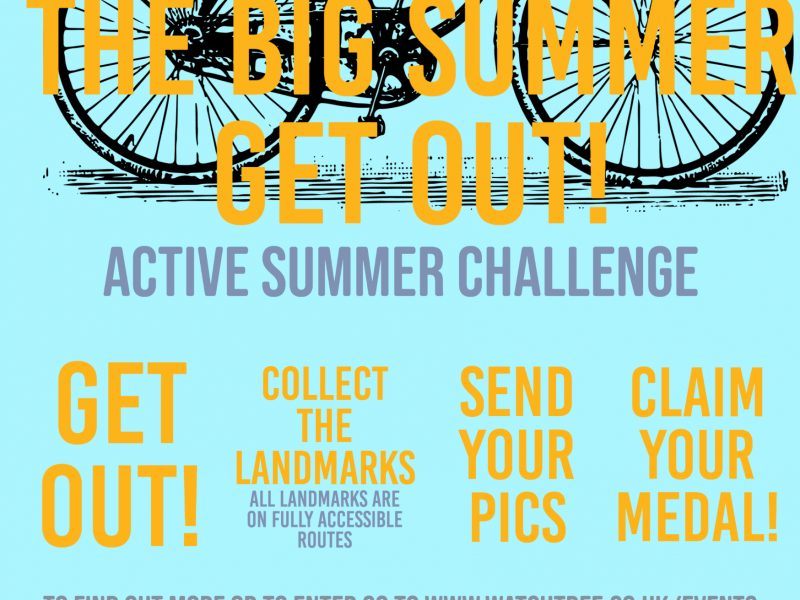