A semi-natural habitat, meadows were once a common feature of the landscape; however, since the 1950s, through modern agricultural practice, these old meadows across the country have declined by as much as 97%. The habitat is a target habitat for UK Biodiversity Action Plan now the UK Post-2010 Biodiversity Framework.

Meadows are the result of old agriculture practices but are now declining thanks to intensive farming. Hay meadows are essentially permanent or semi-permanent grasslands that are cut each summer, usually in July in order to make hay and occasionally silage to feed animals over winter.

The characteristic grasses, herbs and wildflowers that grow in a meadow are not only a beautiful sight; they also provide a habitat for a vast array of species. A single acre of meadow may contain as many as 2 million spiders, and insects that number too many to count! The grasslands provide cover for shrews, voles and mice to hide from predators, while birds such as Skylark, Meadow Pipit and Curlew use the meadow as a nesting site.

Many of the wildflowers such as Black Knapweed and Devils-bit Scabious provide a valuable food supply for vast numbers of butterflies and insect. At Watchtree, re-creating wildflower hay-meadow habitat is a key priority, although converting agriculturally improved land is a significant challenge and there is a lot of work still to do in this regard. There are some parts of the reserve where you can see a meadow habitat. The best area at present is in the south of the reserve between the elemental garden and the first wind turbine. The fields are grazed through the autumn and winter by sheep or cattle. Areas of rough grassland are maintained for small mammals, which are food for the Barn Owl, Kestrel and Stoat. 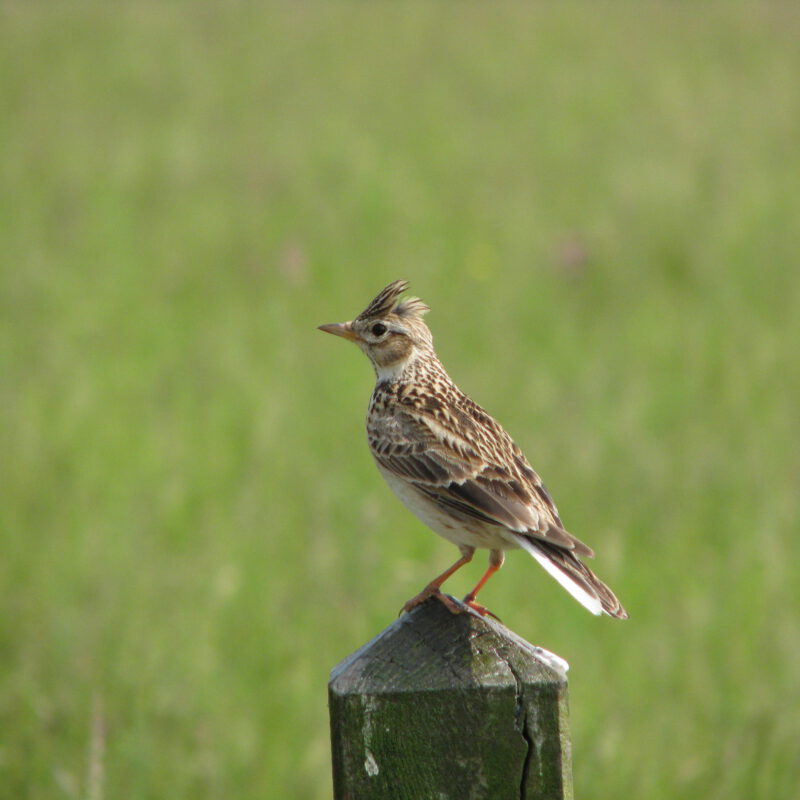 Defining Features
A small brown bird, with a small crest that it raises when displaying, excited or alarmed. Often seen in large flocks out of the breeding season. The Skylark is one of Watchtree’s iconic birds, one that visitors often hear and see.
Size
18-19cm length. 30-36cm wingspan.
Lifespan
1-5 Years
Voice
Chirruping shrrup, trrup. It starts singing by the end of February.
Habitat
Farmland, meadow, moorland.
Feeding
Will forage on the ground or in grass for seeds, shoots, grain and insects.
Nesting
Will typically nest on the ground in grass or in crops.
Breeding season
April – July/August
Young
3-5 eggs in 2 or 3 broods.
UK Conservation status:
Red under the Birds of Conservation Concern 4: the Red List for Birds (2015)
Population trend
Declining 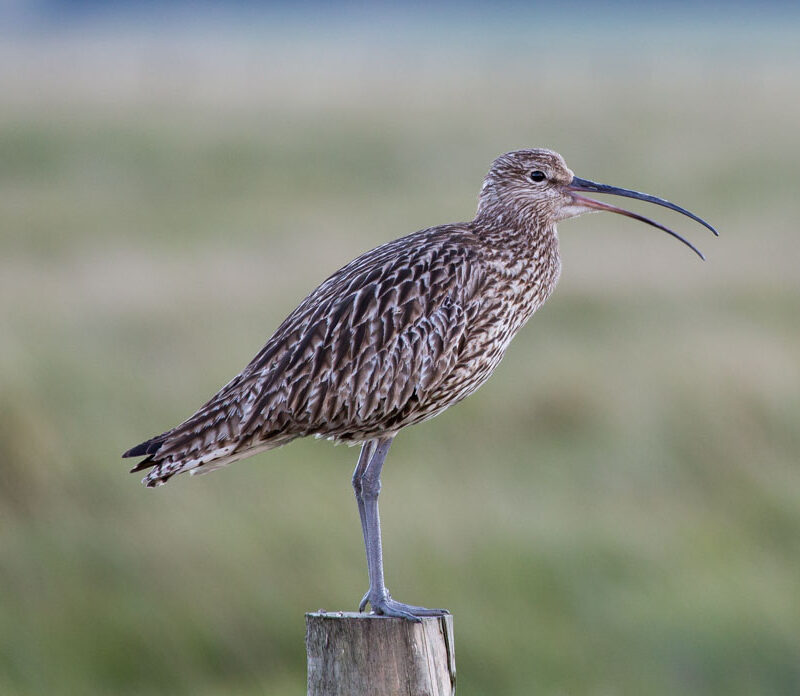 Defining features
Characterised by their long downcurved bills, long legs, and mottled brown plumage. In flight, their pale underwings can be seen.
Size
50-60cm length. 80-100cm wingspan.
Lifespan
5 years
Voice
Loud call whoy, haup, cur-li. Longer, slow cur-lew
Habitat
Shorelines of all kinds, grassland, bogs, mudflats and sand spits.
Feeding
Their long, curved bill allows them to probe into soft mud and sand for earthworms, insects, crabs and molluscs.
Nesting
In shallow hollows lined with grass on the ground away from shrubs and tall trees.
Breeding season:
April – July.
Young
4 eggs with one brood. If first brood fails they will have a second. The eggs have an incubation period of 4 weeks and it typically takes around 32 days for the chicks to fledge.
Conservation Status
IUCN Near threatened.
Population trend:
Decreasing 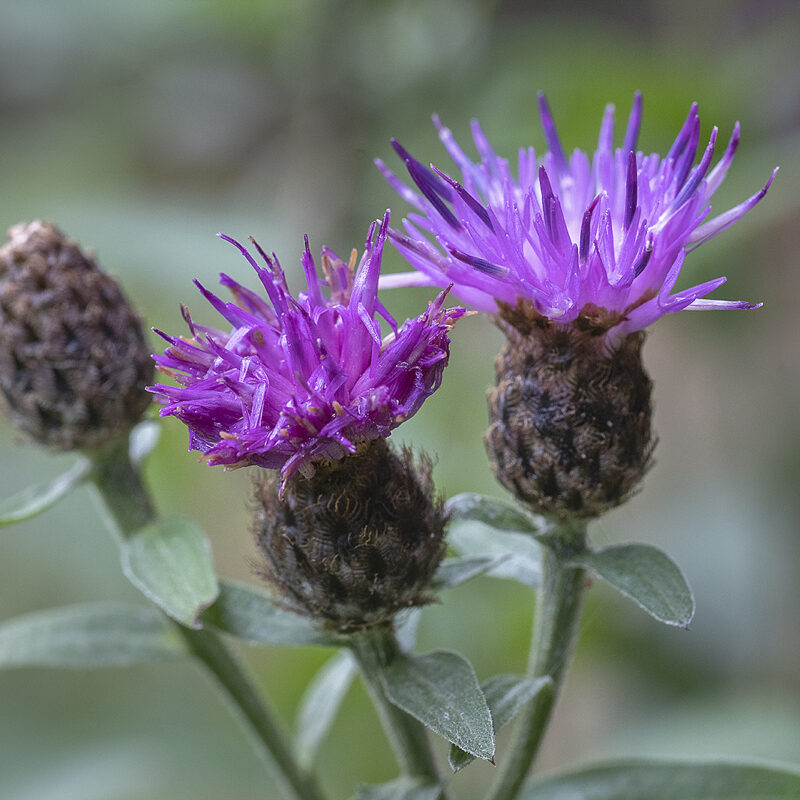 Defining features
Also known as black knapweed, it is a thistle like plant with oblong shaped leaves and purple flowers.
Size
Can grow up to 1 metre in height.
In flower
From June to September
Habitat
Grassland, moorland, farmland, gardens, heathland and woodland
Prefers
Low to moderately fertile soils and plenty of sunlight. It is absent from very damp or acid sites.
Ecological value
It is a source of good quality nectar for pollinating insects. It also supports bees, butterflies and beetles, and its seeds provide food for many birds.
Distribution
Widespread and common
Conservation status
Not threatened. 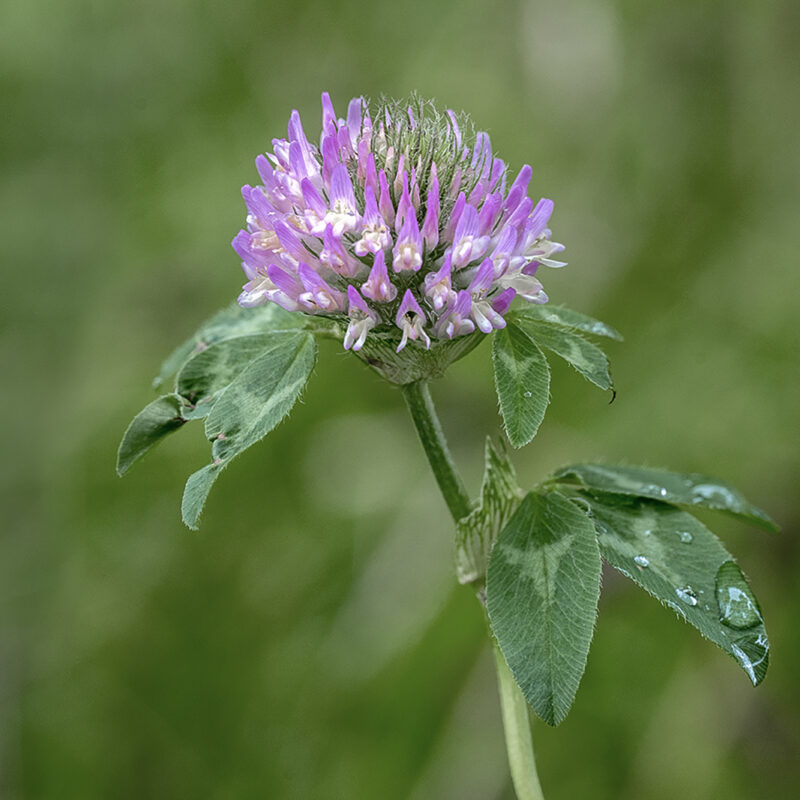 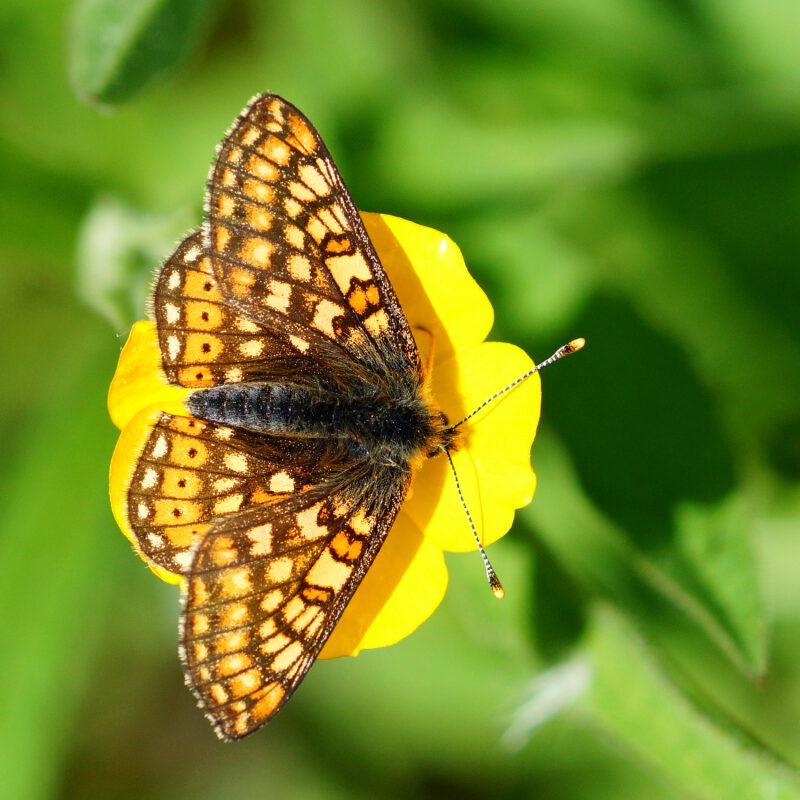 Defining features
A chequered pattern of orange, brown and yellow on the upperwings.
Size
Wingspan - Male: 30 - 42mm. Female: 40 - 50mm
Life span
Adults emerge and undergo the flight period between May and June. Adults have short life spans usually lasting about two weeks.
Habitat
Chalk hillsides, heathland, moorland, and damp meadow. A factor common to all habitats is that they are in full sunlight, their higher temperatures aiding larval development.
Feeding
The larvae feed on varieties of the scabious plant, notably Devils-bit Scabious, which is found at Watchtree and sometimes on Honeysuckle The butterflywill feed on buttercups, thistles and dandelion.
Young
An adult female will typically lay 400-500 eggs in several batches on the underside of the Devil’s-bits Scabious plant.
Conservation status:
hreatened. The Marsh Fritillary actually became extinct in Cumbria in 2004! It has since been reintroduced, and a conservation effort is underway to aid the recovery of this species. Watchtree is one of a number of sites taking part in this effort, with the vitally important Devil’s-bits Scabious being planted in several fields.
When to see it
Marsh Fritillary flies from May to June.
Population trends
Decreasing 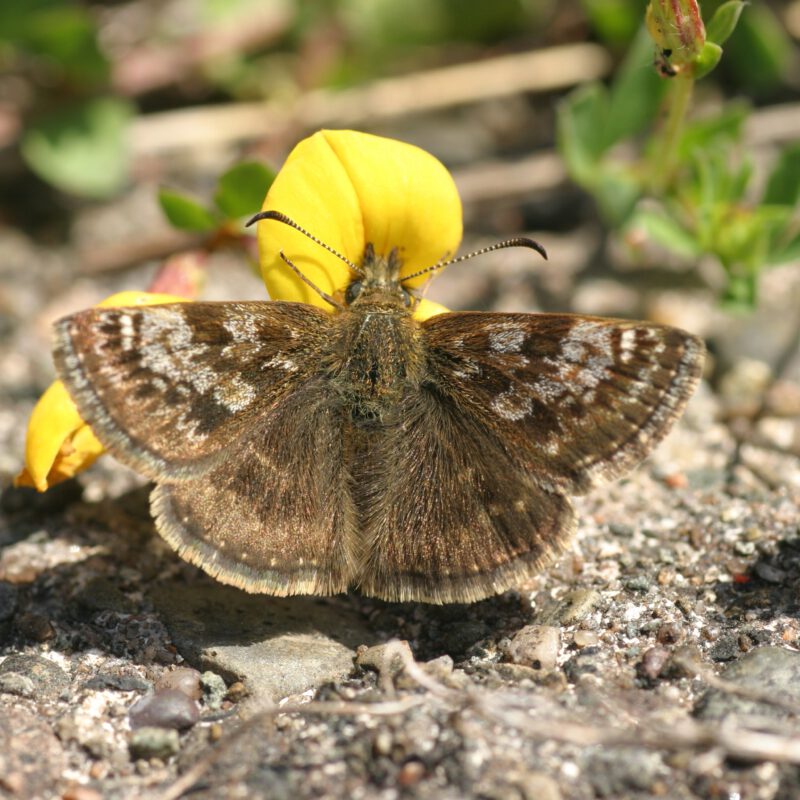 Defining features
Small, brown and grey, and often mistaken for a moth. It has a fast, darting flight.
Size
Wingspan 2.9 cm
Life span
Adults emerge mid-May and are in their flight period until mid-June.
Habitat
Heathland, meadow, grassland, dunes, waste ground and woodland. They require some bare ground, plentiful sunlight and tall vegetation for refuge.
Feeding
Plants such as Bird-foot Trefoil, buttercup and Horseshoe Vetch.
Young
Eggs are laid singly at the base of leaflets and greenish-white when first laid, later changing to orange.
Conservation Status
Threatened. Very few sites remain in Cumbria where this species is present. Watchtree is one of only a few.
When to see it
Flies from mid-May to early June. 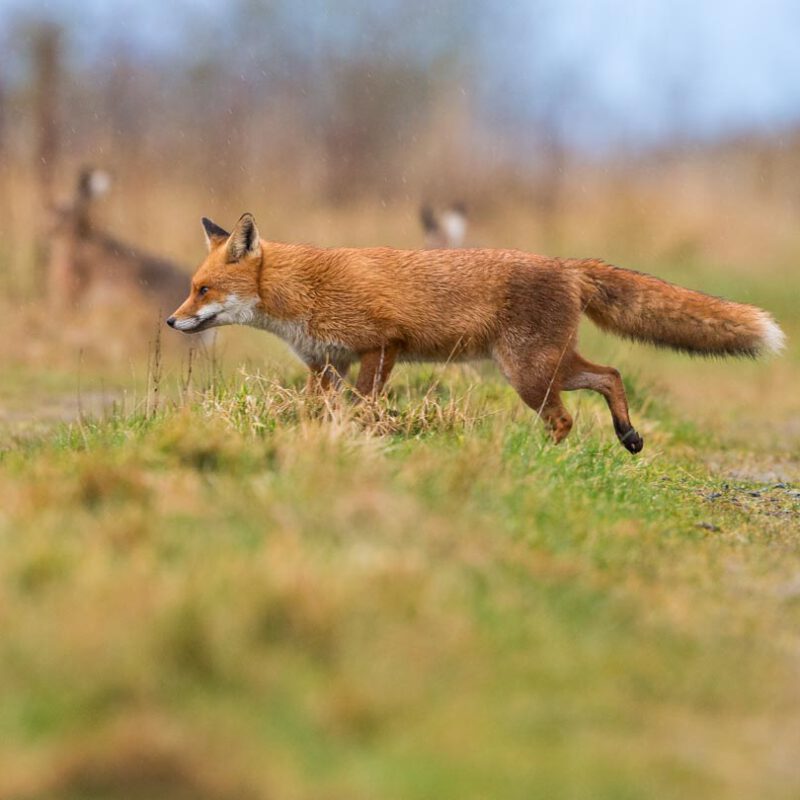 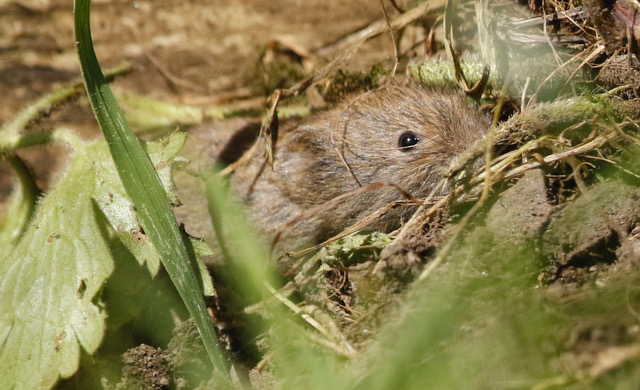 Support the conservation and habitats of these species by donating now